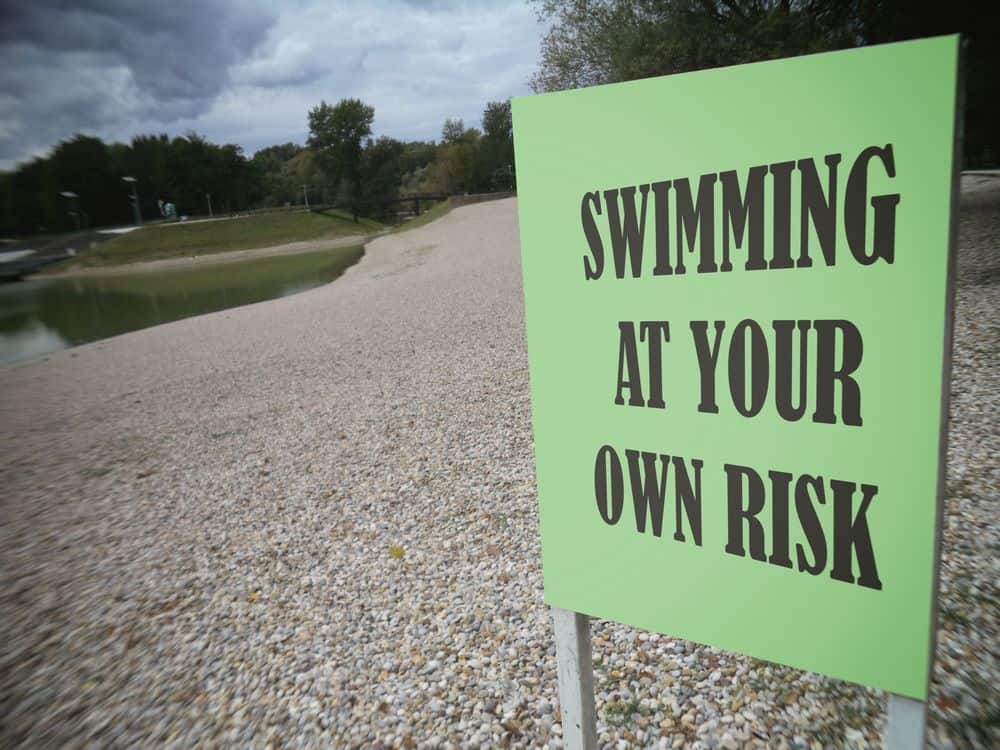 If you swim a lot in freshwater, sooner or later, you may become familiar with cercarial dermatitis.

A typical scenario goes like this: You’re enjoying a relaxing afternoon swimming in a lake and basking in the bliss that is vacation, when suddenly your skin starts to itch. Looking down, you notice you’re developing a rash.

A few hours later, it clears up. “Great,” you think. “At least that’s over with.” But then, while you are sleeping, your skin breaks out again. You wake up to a new set of itchy blisters.

While it may seem unnerving at the time, you probably have contracted a case of cercarial dermatitis, more commonly known by its colloquial name, “swimmer’s itch.” You will be glad to learn it is easy to treat.

What Is Cercarial Dermatitis (Swimmer’s Itch)?

But this sequence of events points toward what has taken place while you were in the water.

Swimmer’s itch is caused by species of schistosomes, which are a type of parasitic worm. The larval stage of these organisms is referred to as their “cercariae.”

If you are infected by them, you wind up with swimmer’s rash.

The CDC has provided a helpful graphic to assist you in visualizing the life cycle of the schistosomes:

Mayo Clinic writes that common hosts for the cercariae (following the stage inside the snail) include geese, ducks, gulls, muskrats, and beavers.

If you are swimming in cercariae-infested water, some of these worm tadpoles may encounter you instead of a preferred host.

It turns out that this goes even more badly for the parasites than it does for you. Upon discovering you, the worms will penetrate your skin. The good news is that they can’t make it further in than that! In fact, they don’t survive long. Nature simply didn’t design them to exist in the human body.

So, the initial rash you get while you are in the water is a reaction to the burrowing process. Then the worms die.

The reason you get a second rash hours later is because you are experiencing an allergic reaction. Because that produces inflammation, it’s a form of dermatitis, thus the formal name “cercarial dermatitis.”

More About the Life Cycle Of Schistosomes

You might be curious how the body of water you swam in came to have parasites living in it in the first place.

Birds and mammals are responsible for bringing the parasites from one body of water to another. If their larvae are unable to locate the appropriate snails in the lake or pond in question, they don’t survive.

But if they do, they are able to progress to the form where they move on from their snail hosts and seek out new birds or mammals to infect. That’s where you come in, however unintentionally.

While those that infect you die, those that find birds or other mammals which are suitable carriers survive. They may then be transported by those animals to other bodies of water.

This does mean that even if you swam in a lake last year which had no parasites, it could have them this year. All it takes is a goose or a muskrat bringing the parasites from elsewhere, and some suitable snails to play host to the next generation.

Of course, if the snails die off, the cercarial dermatitis parasite population could also die off, leaving the water clean again in the future.

The Minnesota Department of Health describes the initial reaction to the worms while swimming as “tingling, burning, or itching of the skin.”

Then, anywhere from 10-15 hours later, your skin will break out into an itchy rash characterized by reddish pimples. In some cases, this can appear quite dramatic and may progress to blisters.

In most cases, this is the extent of what you can expect. But if your skin is injured while inflammation is present—or if you scratch at it—a complication in the form of a secondary infection is possible. For this reason, it’s best to try and restrain yourself.

It’s worth noting that the skin seems to become more and more sensitive to the worms that cause this rash. Mayo Clinic states that “signs and symptoms of swimmer’s itch typically worsen with each exposure to the parasites.”

Pediatriceducation.org expands on this, saying, “Acute systemic reactions such as generalized limb swelling, nausea, diarrhea, and fever can occur with subsequent exposure.”

So, if you figure out that the parasites likely reside in a certain pond or lake, it’s best to avoid swimming there in the future if you do not want another (potentially more intense) reaction.

How Is Cercarial Dermatitis Diagnosed?

Sometimes, a general practitioner can diagnose swimmer’s itch. But in other cases, your primary provider might refer you to a dermatologist for closer examination.

PediatricEducation.org writes, “The diagnosis is usually clinical-based but if needed, the organism can be identified on skin biopsy.”

So, in most cases, you should be able to find out during your clinic visit whether you have swimmer’s itch or not. You probably will not need to have any testing conducted, though there may be exceptions.

Is It Necessary To See A Doctor About Swimmer’s Itch?

To determine if you have swimmer’s itch, your doctor will examine your rash, ask you questions about your symptoms, and find out whether you have been swimming.

Because swimmer’s itch presents itself with such specific timing during and after swimming, it isn’t too difficult to deduce that an allergic reaction to the parasites is what is causing the rash.

Therefore, it may be possible to diagnose your swimmer’s itch on your own. If you feel confident that cercarial dermatitis is what you have, you could try waiting for it to clear up.

Of course, if you have any concerns that you might have something else which is serious, the smart move is to play it safe and make an appointment with your doctor.

Are you wondering if it’s possible to get swimmer’s itch from your backyard swimming pool?

Swimmer’s itch is only possible in the presence of the schistosomes which cause it. To get to the stage of their life cycle where they can burrow into your skin, they first need to infect snails. So long as your swimming pool is clean and isn’t a home to such snails, swimmer’s itch should not be a concern. Indeed, chlorine also helps to kill such parasites.

If you swim in your pool and experience a similar rash, it could be that what you are looking at (and trying not to scratch) is a chlorine rash. It too can cause small bumps and is characterized by itching and redness.

Chlorine rash is an immune reaction, but not always a full-on allergy. It’s more commonly a skin sensitivity.

How Is Cercarial Dermatitis Treated?

One good thing about a case of swimmer’s itch is that you can count on it to go away on its own. There’s no requirement for a cercarial dermatitis cure. The parasites themselves die rapidly, and no further action needs to be taken. All you need to do is wait for the symptoms of the allergic reaction to subside.

But that doesn’t mean you need to put up with the itching at full force. You can treat the symptoms of cercarial dermatitis. The following options are recommended by the CDC:

What if these conservative measures are not enough to keep your itching bearable and prevent the urge to scratch?

In that case, you may want to see a doctor if you haven’t already. Your provider may write you a prescription for a stronger topical treatment.

How Long Does Swimmer’s Itch Last?

Not only does swimmer’s itch typically go away by itself, but it also tends to do so fairly quickly.

In most cases, the rash should abate after 4-10 days.

It is possible, however, for it to stick around for up to several weeks.

Can You Prevent Cercarial Dermatitis?

If you had not gone swimming in infested waters, you would not have contracted swimmer’s itch.

You obviously will not want to give up swimming in freshwater altogether. So, this raises the question of what you can do to prevent another bout of swimmer’s itch in the future.

There are a number of recommendations which can help:

Cercarial dermatitis can be an irritating condition (in more ways than one). Thankfully, despite how dramatic the rash may sometimes appear, it’s quite literally skin deep.

If you find yourself with swimmer’s itch, you can rest assured that the parasites penetrated no deeper than your skin and perished swiftly. All that is left to do is to soothe your itchy rash, avoid scratching, and wait for it to pass.

Benadryl is marketed as providing “relief from most outdoor itches.” While the company itself does not mention swimmer’s itch specifically, Seattle Children’s recommends it in cases of severe itching. You can take it up to four times daily. The clinic cautions that it is not safe for children under one year of age.

2. Is swimmer’s itch the same as chiggers?

In terms of appearance, bites from chiggers do look similar to swimmer’s itch. Both conditions are characterized by red bumps on the skin, and both may form blisters. On top of that, each can make you desperately itchy.

To get specific, chiggers are more formally referred to as “trombiculid mites.” Sometimes people call them “red bugs,” “harvest lice,” or “mower’s mites.” They are incredibly tiny, and hard to see with the naked eye. Their larvae like to bite.

Where matters can get confusing is when you consider that is possible to find chiggers in the same locations that you encounter the parasites that cause swimmer’s itch.

Both like moisture. You could get chigger bites after traipsing through a field, but you also could get them as you are wading through grass into a lake or pond to take a swim.

Theoretically, you could even get swimmer’s rash and then step out of a pond and get chigger bites. You could end up with both rashes simultaneously.

On the bright side, chigger bites typically resolve within days. So even if you do wind up with both, they should get better fast.

3. How can you aid swimmer’s itch control efforts?

Don’t want the next person who fancies a dip in the pond you just climbed out of to have the same bad experience as you? Get in touch with the authorities that manage that body of water and inform them that you came into contact with schistosomes and developed swimmer’s itch.

Ask them to post signs so that the public is aware of the risk posed by the parasites. Hopefully, future swimmers will be spared the inconvenience of the rash.